I feel I must appologise for the "sketch" above! It isn't strictly finished anyway as it is one of those pieces I will keep picking at and fiddling with until it is virtually low-relief sculpture with the ever building layers of graphite, chalk and fixative. It is like an itch I can't stop scratching- unless someone does me the favour of buying it. There are several reasons for this obsessive compulsive behaviour, but ultimately I still hope it will result in a better picture!
The biggest problem was that I did no field-sketches. I did not even have a note-book with me when I went into the field on the 26th as I had given up on getting a lift to the Godwit, and was  resigned to a day of seeing very little and perhaps cheering myself up by swearing at dog-walkers at Stanwick Lakes! However, through twitter I as offered a lift by Andrew Tongue, and after running 2 miles to meet him  on the A45 we made good time, getting to Meare about an hour before the bird "left" (I was never convinced it had gone given the weather conditions, and anyone familiar with my twitching-history, and the application of "sod's-law" would know that if I ever see a bird on it's "first" day it promptly decides to remain for at least a week, removing any "grip-value"). I managed to take a few photographs, mostly of the bird in flight, and I drew up sketches as soon as I got home. I had seen more of the bird's "left profile", and tried to note where the complex mix of summer and retained winter plumage fell in the wing-coverts and scapulars. 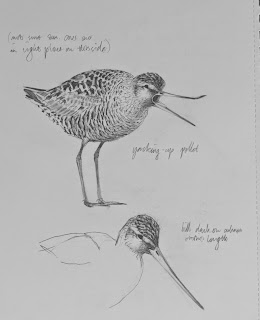 At this point I inevitably had to look on-line to see if there were any decent images- and this is where the moral dilemma occurs. I wanted to produce pictures of the bird for sale but I clearly had not got good enough pictures of my own (of the bird on the ground) to use. Any bird illustrator would freely admit to having to use photographs as reference, but this is a far cry from copying a single image. This becomes tricky when a single individual is the subject- the resulting "portrait" will only be 100% accurate if images of the same bird are used. Personally I have always been uncomfortable with this, so in the case of the Godwit I made the decision early on to only depict the bird's "right profile" as there were- at the time- no decent images I had seen to unduly influence the way I drew it. The result is there are almost certainly errors in the "finished" article, but what concerns me more is the water and shading- I am trying to capture how I remember seeing the bird, not count how many summer median coverts it had etc! 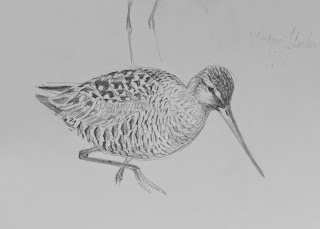 This means I will probably limit myself to depicting the bird from the same side on "the deck", but will have far more freedom to paint it in flight. To me this was the most striking aspect of the bird, and the wheeling flock of accompanying islandica Black-tailed Godwits make for a far more exciting and dynamic picture- I just need to knuckle down and get the oils out!
So having made all the above excuses I still hope to produce more pictures of what was a genuinely handsome bird, and- needless to say- I will be happy to undertake commissions. It only remains to thank A.T. for the lift, and congratulate all those involved over the years in making the "Levels" into a fantastic area for birds! 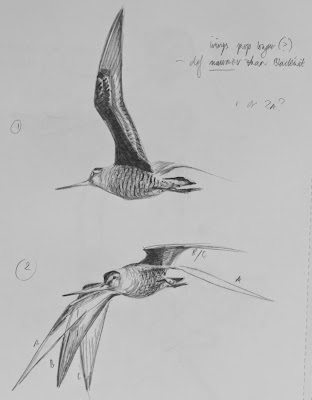